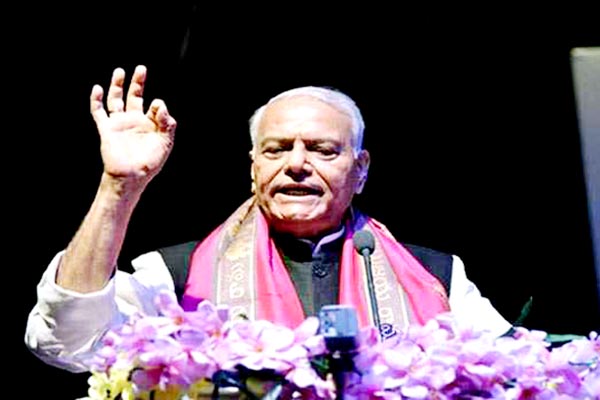 Patna, In a setback to BJP ahead of 2019 Lok Sabha election, veteran party leader and former union minister Yashwant Sinha today left the party by asserting that democratic institutions were under threat in the Narendra Modi government. Mr Sinha, who has been attacking Prime Minister Narendra Modi and his government since long made an announcement to that effect during a conference of National Forum or Rashtra Manch at SK Memorial here in presence of another sulking BJP leader and MP from Patna Sahib Shatrughan Sinha. “I have separated myself from electoral politics four years ago and now I am also distancing myself from party based politics,” he remarked asserting that he was not claimant to any post in future. He also made it clear that he would not join any party. Mr Sinha said he would launch a very strong drive ‘jabardast abhiyan’ to save democracy with his friends. Senior Congress leader Renuka Chowdhury was also present at the dais. Mr Sinha’s son Jayant Sinha is union minister of state for civil aviation in Narendra Modi government. Mr Sinha, who was an IAS officer before he joined BJP said if atrocities on women and Dalits had increased, the next government could curb it but if democratic institutions were destroyed, it would be difficult to revive them.