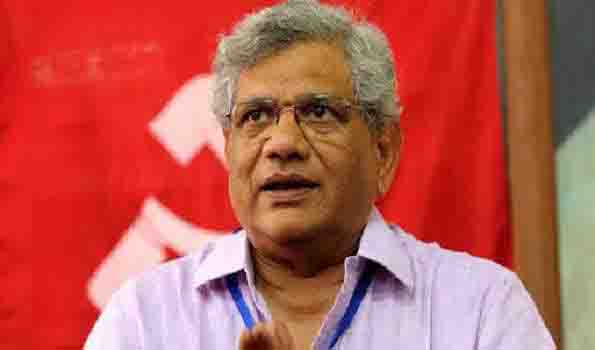 Madurai, Communist Party of India (Marxist) General Secretary Sitaram Yechury has appealed to the people to fervently take part in the nation-wide door-to-door campaign organized by the party between March 1 and 23 against the Citizenship Amendment Act (CAA), National Register of Citizens (NRC) and the National Population Register (NPR).

Addressing a public meeting against the CAA here on Sunday night, he said Prime Minister Narendra Modi and Home Minister Amit Shah have been calling us anti-national and accusing us of eying vote bank politics. But, it is they who are trying to consolidate a divided hardcore Hindutva vote bank and hurting India by spreading chaos and hate. 'We must work together to save the nation first from this large-scale conspiracy and then work towards building a better nation', he said.

Let Mr.Modi and Mr.Shah declare half of India as non-citizens as they defy answering questions as part of the NPR and refuse to show documents for the NRC. Let us see which India survives, Mr Yechury said. He also appealed to the people not to give details for NPR and show any documents to the officials, when the exercise starts on April 1, since it is the base for implementation of NRC. The CPI(M) General Secretary urged all 13 chief ministers of non-BJP ruled states and union territories, who have announced that they will not implement CAA, must also not allow NPR.

Mr Yechury charged that anti-CAA protests were brutally nipped with the help of police in the BJP-ruled States like Uttar Pradesh and Assam, where 21 people and five people were killed respectively. Even their allies were using brutal force. In Tamil Nadu, people have seen a couple of days ago how police used brutal force against a peaceful protest. They want to curb all peaceful protests through the use of most brutal police terror and police attacks. But people are not succumbing to the police brutality, he claimed. Referring to the proposed visit of United States President Donald Trump, he said the CPI-M will protest wherever Trump lands to protest against US imperialism, the way they are dealing with the world and looting India.