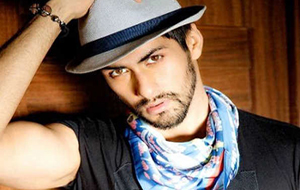 New Delhi, Model-turned-actor Namit Khanna, who is marking his debut in television world with Sony channel's upcoming show 'Yeh Pyaar Nahi Toh Kya Hai', said it is a great choice to kick off in the industry and the character of 'Siddhant Sinha' is a dream role to play. Talking to UNI, Namit, who is in the national capital with his entire team for the shooting of the serial, said, 'the story was written for 'Siddhant Sinha'. So it's a dream role. In films I think there is no such opportunity for a lead what I got here, so it's a long run.' 'TV is a great opportunity. TV and film both are a gamble. Film is all box office. In TV I can work for 10-12 months and everyday I can improve myself. Even if I make mistakes I can fix it. But in Bollywood I won't get that chance, once the film is released, it's done. TV is a great choice indeed. And I think I won't get better reach than TV,' Namit said. Talking about his character 'Siddhant Sinha', he said, 'Siddhant is a lawyer and he is extremely passionate about what he wants to achieve. His problem in life is rich people. He hates them, but he wants to become rich himself. So there is a contrast. He comes from a middle class family and he has never seen those riches, money. He hates the second generation rich people, born with a silver spoon. He is charming and gets what he wants. He taunts people through his poetry and shayaris. He is very deep, well thought out, layered person. He has lot of emotions but doesn't show it. He is a fun guy, cool in his own way and wants to join Reddy's Corporation.' Namit, who has played a grey role in Vikram Bhatt's web series 'Twisted', said, 'This is a family entertainment serial, the audience is different here. In a web series the stuff is bit lusty. That thing is not portrayed here.' Questioned on which genre he prefers, Namit replied, 'I like this romantic genre. I don't mind doing grey characters but in India the actors get typecast, so I didn't want to do that again at least right now. I want to do something different. And this is very nice. I am playing a professional lawyer, so a different image of mine will be shown to the audience. It will be a totally different light to what I played earlier in 'Twisted', which is great for an actor.' Asked if he faced any challenges playing the character, he said, 'Not as such. Actually I am enjoying it. The scenes I have played of a lawyer wearing the black coat and fighting cases in the courtroom, I really enjoyed doing them.' As to how did he got on board for the serial, Namit said, 'I gave the auditions in their office. The creative writer really liked it, and within two days everything was finalised... it was 'connection at first sight'.' Offering his views on growth of web series in India, the actor said, 'I think it's the next big thing. There is so much liberty, any audience can be targetted, any content covered, and the money is not spent as much that done in TV or film. I think it's a great platform.' The actor said he preferred films, 'but at same time I am open to TV and web series as well.' Sharing his experience of working with senior actors like Anuraag Arora and Alka Amin, Namit said, 'I really felt comfort working with them. Things were flowing. There is a feeling of theatre too -- you don't want to cut or finish the shots. I learned the actors' demeanour on the sets from them. They are very professional, very precise. They know what exactly they are doing, they will ask the right questions, they come with their own little nuances.' Namit said he doesn't mind joining the Dharma or Yashraj camps. 'But at the same time I am open to artists stuff also. Because I want to establish myself as an actor. I am open to good work,' he added. With no family background in the industry, when asked if he ever felt out of place, Namit said, 'As an actor in the starting there are difficulties. But those things go away when you do work. So whatever acting classes I have taken that has helped me a lot. Now I feel more comfortable. It comes naturally.' Partnering with Bindu and SJ Studios, Sony brings a breezy yet absorbing world of romance in 'Yeh Pyaar Nahi Toh Kya Hai.' This is that shade of love that is unspoken but palpable, unexpressed but perceptible, of Siddhant Sinha (Namit Khanna) and Anushka Reddy (Palak Jain). The entire show is being shot in Delhi at real locations to give its viewers a completely differentiated cinematic experience and bring alive the world of its characters. Making their debuts on television, Namit and Palak share screen space with an ensemble of talented artistes, like Manish Chaudhary, Anuraag Arora, Alka Amin, Ankit Raj, Shahana Verma and others.