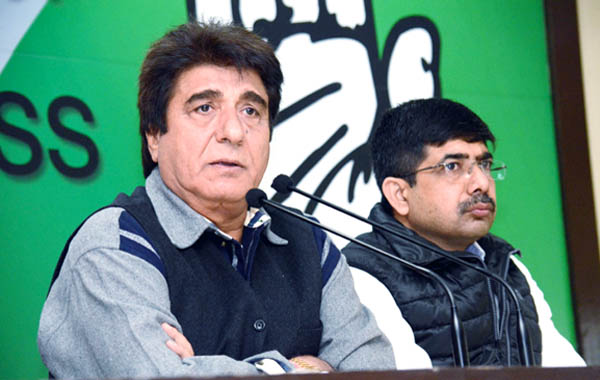 New Delhi, Expressing concern over the deteriorating law and order situation in Uttar Pradesh and the delay in arresting the culprits of Inspector Subodh Kumar Singh’s murder, the Congress on Saturday demanded judicial probe into the Bulandshahr violence. Addressing mediapersons here, Congress UP chief Raj Babbar said the killing of the police Inspector was not the only incident and added that after the government came to power in 2014, the country is witnessing number of incidents where BJP leaders and their goons are threatening, insulting and attacking police officers and others. "The Bulandshahr incident happened on December 3. Even after 25 days, the police are still clueless about the killers of Singh. Chief Minister Adityanath and other leaders of BJP are putting conspiracy theories time to time. They are not only doing anything to catch the killers, but shielding the culprits”, he alleged. He said the Congress is not satisfied with the enquiry and only a judicial enquiry headed by either by a Supreme Court judge or the Chief Justice of Allahabad High Court can unearth the truth. He also said in Uttar Pradesh as well as other part of country, the mobocracy is growing and added that “there are number of incidents of violence and killings across the country but no action has been taken in any case”. Mr Babbar added that the Uttar Pradesh Chief Minister did not show the courtesy to visit the slain Inspector’s home, instead he summoned the Inspector’s family to his residence. “There is a complete anarchy in the state. Also the common people’s life is in peril due to the government’s attitude. The people had given 71 seats to the BJP in 2014. But they did not given anything to the people”, he alleged. The Uttar Pradesh PCC chief also said that Adityanath government has no right to continue in office as the life of women and other citizens is in danger.