Youth had given supari for attacking college director 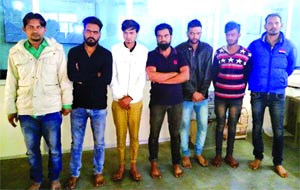 A youth had given supari for attack on the director of Hahnemann Medical College at Nishatpura. Police have nabbed seven accused. The accused had barged into the college, assaulted the director and damaged the furniture. More than half dozen youths had assaulted Hahnemann College’s director Humaid Aqueel and took him to the police station in an auto. They told police that they had caused damage to the college property after the director molested a young woman. The accused had got a case of molestation registered against Humaid Aqueel.However, during interrogation the youths admitted that Aslam had given them supari to assault college director. After this the main accused Aslam and other accused were arrested and booked.