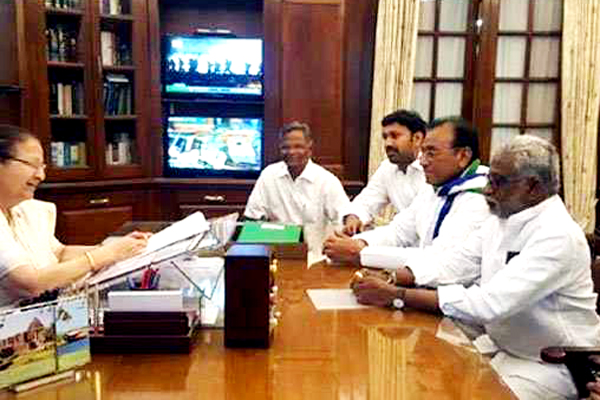 New Delhi/Vijayawada, Demanding the Bj-led NDA government at the Centre to honour the AP Re-organisation Act 2104 provisions including Special Category Status (SCS) to the state, the Principal Opposition YSR Congress Party (YSRCP) MPs from Andhra Pradesh tendered their resignations to Lok Sabha Speaker Sumitra Mahajan in New Delhi on Friday. YSRCP sources here on Friday, said that the five Party MPs from Lok Sabha-- V Vara Prasad Rao, Y S Subba Reddy, P V Midhun Reddy, Y S Avinash Reddy and M Rajamohan Reddy met Speaker and handed over their resignations. The MPs resignations were in “Speaker format”, the sources added. In their resignation letters, which were released to the media here today, the MPs said “I hereby tender my resignation to my seat in the house with immediately effect”. After submitting the resignations, the YSRCP MPs garlanded the statues of Ambedkar and Mahatma Gandhi in the Parliament premises and left for Andhra Bhavan, where they embarked on an fast-unto-death. YSRCP President Y S Jagan Mohan Reddy, who has been on his padayatra, since the last three months, said in his twitter that the Party MPs had resigned and embarked on anindefinite fast demanding SCS to AP. He appealed to people of the state to observe relay hunger strikes expressing solidarity to the fasting MPs. Mr Reddy said he would address a press conference in Guntur this evening to respond on the resignations of party MPs.