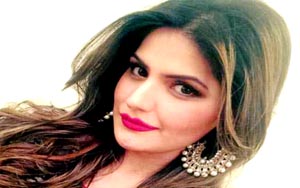 New Delhi, Actress Zareen Khan who was last seen in movie '1921', is all set to play a cop in 'One Day' and has started learning the Haryanvi accent for her film, trade sources said. 'For the first time, Zareen will explore a new avatar in the movie by essaying the role of a cop. The film is set against the backdrop of Ranchi and hence, Haryanvi is an integral element. Considering that the language holds importance, the actress will be learning the Haryanvi accent,' sources said. Zareen has been spending one and a half hour for her training in order to get the right dialect, it said. The film will be extensively shot in Ranchi. However, Zareen Khan plans to leaves two days prior. The actress wants to use this time to interact with the locals there and excel the accent, sources said. 'Yes I am learning the Haryanvi accent. And I am finding it very interesting as it is something I haven’t done before,' Zareen said.Directed by Ashok Nanda, 'One Day' is slated to go on floor by the end of this month. The film will also stars legendary actor Anupam Kher.