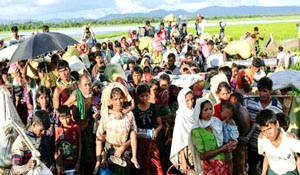 United Nations, Myanmar should “have some shame” after attempting to convince the world that it is willing to take back hundreds of thousands of refugees who fled an “ethnic cleansing campaign” last year, given that “not a single” one has returned officially, the United Nations human rights chief has warned. Addressing the Human Rights Council after giving an update on the refugee crisis that has seen more than 700,000 Rohingya people flee to Bangladesh to escape a security clampdown in Myanmar, Zeid urged the UN Security Council to refer the Member State to the International Criminal Court (ICC) immediately. “We are not fools,” he said. The High Commissioner for Human Rights also responded to the Myanmar Government representative’s comments that it was a “body committed to the defence of human rights”. This, Mr Zeid said, “almost creates a new category of absurdity” – a first during his mandate as the UN’s top human rights official. “In the four years that I have been High Commissioner I have heard many preposterous claims,” he said. “This claim, that I have just stated now, almost creates a new category of absurdity. Have some shame sir. Have some shame. We are not fools.” Earlier at the Human Rights Council, Mr Zeid said that Myanmar had “expended considerable energy” challenging allegations that its security forces carried out ethnic cleansing against the mainly Muslim Rohingya. In January, he continued, the Government of Myanmar had signed a repatriation deal with Bangladesh, which continues to host the communities who fled their homes last August. Despite this agreement, “not a single Rohingya refugee has returned under the formal framework agreed with Bangladesh”, he said, while “many – if not all – of those who have returned … have been detained”. Citing one example, the High Commissioner said that between January and April this year, 58 Rohingya who returned were arrested and convicted on unspecified charges. “They then received a Presidential pardon, but have simply been transferred from Buthidaung prison (in northern Rakhine province) to a so-called ‘reception centre’,” he explained. All the while more Rohingya continue to seek shelter in Bangladesh, he continued, noting that as of mid-June, there have been 11,432 new arrivals there. On the issue of ICC involvement in the issue, as he had urged, Mr Zeid noted that the results of its fact-finding mission to Myanmar were due to be submitted “in a matter of weeks”. The UN official also repeated a call for access to northern Rakhine state on behalf of the Human Rights Council and his own office, OHCHR. Myanmar should do this “instead of coming out with one bogus national commission after another”, the High Commissioner said – a reference to the country’s recent announcement that it intended to set up an “Independent Commission of Enquiry” to investigate alleged rights violations by Rohingya militants known as the Arakan Rohingya Salvation Army (ARSA) last year. While the Government claimed these attacks the cause of the current crisis, the UN rights chief explained that this was not possible since “cycles of violence” against the Rohingya “long pre-date ARSA, which was reportedly established in 2013”. Barring any special meetings called by the Council after this 38th scheduled session, Mr Zeid’s address was his last in his official capacity as UN High Commissioner for Human Rights before he steps down. Noting this, he cautioned that “if a Member State of this organization can force out 700,000 people in almost three weeks, with practically minimal response by the International Community, then how many others in this Chamber are beginning to entertain something similar?” Myanmar, speaking as a concerned country, said that many of the allegations in the address by the High Commissioner were flawed, incorrect and misleading. ARSA had committed heinous and shocking atrocities, its delegatation said, adding that the root cause of the tragedy was terrorism. On the subject of repatriation, Myanmar was doing its utmost to repatriate the displaced persons as soon as possible, the delegation insisted.