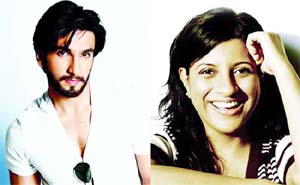 Zoya Akhtar’s Gully Boy starring Ranveer Singh and Alia Bhatt finally wrap their film’s schedule in style. At the end of day 78, Zoya Akhtar went live from her Instagram handle giving a glimpse into their quirky wrap celebration. Going in sync with the film’s theme, the wrap of Gully Boy witnessed talent galore with Beatboxing and rap enthusiasts showcasing their skills and having a gala time. The entire crew was surprised with gifts which were musically present to them by Ranveer Singh in Rap style. Gully Boy is a story inspired by slum rappers of Dharavi. Ranveer Singh who is paired opposite Alia Bhatt for the first time on the big screen is playing the role of a street rapper. Ever since the film has been announced, Gully Boy has been making an immense buzz be it for the prep videos or the on set leaked images. The film has gone ahead to create huge anticipation amongst the masses. The film is Ranveer’s second collaboration with Zoya which showcases the actor in a leaner avatar. Gully Boy also stars Alia Bhatt who is marking her first outing with Excel Entertainment and Zoya Akhtar will be seen in a never seen before avatar in Gully Boy. The film also stars Siddhant Chaturvedi and Kalki Koechlin in pivotal roles. Gully Boy has been creating immense buzz ever since its announcement. Be it for the prep videos or the spottings. Directed by Zoya Akhtar and produced by Excel Entertainment, Gully Boy is slated to release on 14th February, 2019.